How many infiltrators are there in Israel?

Infiltrator: The legal definition derived from the Prevention of Infiltration Law
states: “A person who is not a resident of Israel, who entered Israel not by way
of a border crossing.”[2] An ‘infiltrator’ is the formal term and the most neutral
as it describes the way of entrance into the country. The Supreme Court
judges also use this legal term.
Asylum seeker: Only a small number of the infiltrators, 22%, are asylum seekers – i.e. they have filed a claim for refugee status on the grounds that their lives and freedom are at stake in their country of origin; their claims have yet to be reviewed. In other words: 78% of the infiltrators have never submitted a claim for asylum.[3]
It should be noted that the filing of a claim is not an indication of the
applicant’s situation in his or her country of origin, but purely a submission of
a claim. Most of the claims for asylum around the world are denied.
Refugee: Someone whose claim for asylum has been reviewed and accepted
and is thereafter recognized by the state as being entitled to protection. 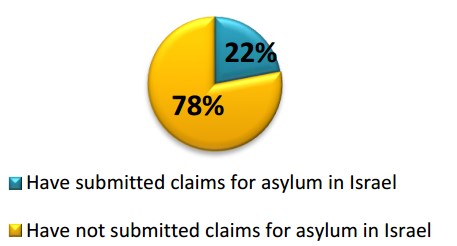 [3] As of August 2017, of the 64,850 infiltrators entering Israel, 14,318 had applied for asylum. Population and
Migration Authority, (2018). Data of foreigners in Israel, Table 2.
https://www.gov.il/BlobFolder/generalpage/foreign_workers_stats/he/foreigners_in_Israel_data_2017_2.pdf

Does Israel allow submissions of claims for asylum? Why have the claims already submitted not been reviewed by Israel?

The allegation that Israel does not allow claims for asylum to be submitted is
incorrect. Up till 2013, because of the huge influx of infiltrators into Israel, the
country granted group protection, or adopted the ‘temporary exclusion’
policy, towards all Eritreans and Sudanese with no exceptions, thus not
allowing them to submit individual claims for asylum. From 2013 until the
beginning of 2018, for approximately 5 years, Israel allowed anyone who so
desired to submit a claim for asylum. The infiltrators in Israel were made
aware of this option, which was even publicized by the United Nations High
Commissioner for Refugees, and thousands took advantage of it.[4]
Approximately 80% of the infiltrators in Israel have never bothered to apply
for asylum. The reason for this is that they prefer to continue benefiting from
the rights Israel grants them under the group protection which includes the
protection of labor laws, subsidized health care for their children, free
education, etc. Presumably the infiltrators do not want to risk losing their
status if their claim is denied. Anyway, even if there are other possible
explanations, it is all speculation. The only indisputable fact is that most of the
infiltrators have never submitted claims for asylum.
However, the State reviews claims for asylum at an extremely slow pace; the
Israeli Immigration Policy Center is demanding an increase in the pace for
reviewing the claims.

Why is the percentage of recognition so low?

It is an undisputable fact that up till now Israel has only granted refugee
status to 12 Eritreans and Sudanese. This is a low recognition rate. On the one
hand, Israel has adopted a limited interpretation policy and does not
recognize desertions from the Eritrean army as grounds for receiving refugee
status, focusing only on personal persecution due to religion, ethnic origin,
etc. On the other hand, Israel has granted humanitarian status to 1,100
Darfuris, granting them temporary residency which confers on them the same
rights as recognized refugees. This is in contrast to the growing international
trend of rejecting claims for asylum from Sudan. For example, a joint report
from the Danish and British governments determined that most of the
Darfuris can return to Khartoum, the capital of Sudan, without any fear.[5]
Therefore, taking the Darfuris into consideration, Israel has granted status to
at least 73.6% [6] of the asylum seekers, and has declared that more Darfuris will
be granted status in the near future.
In general, it is important to understand that there are differences in the
policies for recognizing refugees, not only between Israel and countries in
Europe, but also between different countries in Europe itself. The gap stems
from the choice of adapting either a limited or expansive interpretation of the
international conventions.
More about the gaps can be learnt from the data provided by UNHCR.
In 2012 Netherlands granted refugee status to only 2.6% of the Eritrean
asylum seekers, while Germany recognized 73.6%.6 In 2015 Switzerland
recognized only 7% of the Sudanese asylum seekers (11 out of 161 claims for
asylum), while Austria recognized 52%.[7]

It is imperative to point out, that contrary to the one-sided picture the aid
organizations for infiltrators paint, the State of Israel plays an important and
active part in the international effort to help refugees. Israel has provided
medical treatment to thousands who were wounded in the civil war in Syria,
awarded citizenship to around 2,000 of the South Lebanese Army soldiers and
sends rescue and aid missions to disaster areas around the world, etc.
Finally, the State of Israel, setting itself apart from Europe, has granted
protection against deportation to their country of origin for 100% of the
Eritreans and the Sudanese. This status has allowed them to work legally, to
receive health insurance at their employer’s cost, free education for their
children, subsidized day care, health insurance for their children, partial access
to grants provided by the National Insurance, etc. This protection was
recognized in the statistical files of the UNHCR as ‘refugee-like’ status. [8]

Why are the infiltrators not deported back to their country of origin if they are not refugees?

Sudan: Israel cannot send Sudanese infiltrators back to Sudan, even if the
claim for asylum has been reviewed, and it has been determined that they are
not entitled to protection. This is because Israel has no diplomatic relations
with Sudan, which considers the State of Israel an enemy state and therefore
does not allow Israel to deport these infiltrators directly. Whilst most are not
refugees, the current global trend is to make things more difficult even for
those who have emerged from conflict zones like Darfur. However, citizens of
Sudan can return to their home country from Israel through a secondary
country. According to the Immigration and Population Authority’s statistics,
many Sudanese have already returned to Sudan.[9]
Eritrea: Israel has not deported Eritrean infiltrators back to their country
because Eritrea is only willing to accept citizens who have been in exile and
return of their own free will. A report by the EASO, an official development
institute of the European Union working to delineate a unified asylum policy
for all European Union countries, shows that any infiltrator willing to pay a 2%
tax on their income, to write a letter of remorse and to regulate their status
with the authorities may return to their homeland, without fear. In other
words, they return only of their own free will. [10]

One possible explanation for this policy is that one third of Eritrea’s GNP
(Gross National Product) is derived from the money the Eritrean immigrants
around the world send to their families. It’s even safe to say that the Eritrean
emigrants are almost the country’s sole export industry. Therefore the
government has a huge economic interest in broad labor migration and is not
interested in the forced return of its citizens, especially as it will then
contribute to the loss of the above source of income.[11]
For that reason we, the Israeli Immigration Policy Center, promoted the
‘deposit law’. This law demands that all employers deposit 20% of the
infiltrator’s wage to a designated bank account – an amount which they can
take on their departure. This has resulted in more than 2,000 Eritreans
independently returning to their country of origin.[12]
In general, many factors make it difficult to deport infiltrators back to their
country of origin. However, these factors are not enough to prove that their
lives are in danger. In addition, there may be cases where, even though the
asylum seeker is in danger, they have not met the UN’s convention criteria of
refugee status and therefore are not entitled to this status.[13] In these cases, it
is the obligation of the State to refrain from sending them back to their
country of origin. However, within the framework of appropriate agreements,
the country has a sovereign right to deport the infiltrator to a safe third
country.

Why does Israel deport only Africans?

This is a false claim as not only Africans are being deported. On the contrary,
most of those deported each year come from East Europe, and only a minority
is from African countries. In 2017, according to data from The Immigrant and
Population Authority, of the 5,841 illegal immigrants deported from Israel,
most were from Europe and Asia: 3,361 were Ukrainian citizens, 232 Russians,
and 252 were citizens of Thailand. [14]

The deportation of illegal immigrants from Israel
according to country of origin and year:

Is Israel condemning the infiltrators to death by sending them to a third country?

The answer is plain and simple – no. The third countries, Uganda and Rwanda
(according to foreign publications), are defined by the UNHCR as
governments which has adopted among the most progressive policies
worldwide to support refugees.[15] In the above countries, no infiltrator is
condemned to die, enslaved or persecuted. Based on a small number of
anonymous statements by infiltrators who have left Israel, the aid
organizations claim that in the above two countries, the infiltrators were not
allowed to stay and were forced to risk their lives trying to make their way to
Europe. This claim was rejected by the District Court and the Supreme Court,
both stating unanimously that there was no basis to this accusation. The
District Court even criticized the evidence, calling it biased and unreliable.[16]
The Supreme Court criticized the methodology used to write the statements.[17]
In addition, the District Court determined that it was in the interest of the
infiltrators to report that they had no option to remain in the countries, in
order to gain status in the countries they moved onto.[18]
The Supreme Court acknowledged that some of the infiltrators chose to try to
immigrate to Europe, with all the dangers involved, but stated that the
immigration was done on their own free will. With regards to the former, the
President of the Supreme Court, Miriam Naor, stated that the moment
infiltrators were granted status in a safe country, yet chose to move on to
another country, the responsibility of the State of Israel expired.[19]