You are here: Home1 / Knesset and Legislation2 / The Knesset Committees

Over the years the IIPC positioned itself at the heart of the parliamentary struggle to form a solution to the problem of infiltration into Israel. In addition to actively participating in discussions on legislation relating to the matter, the center took active part in many meetings and sessions of Knesset committees. 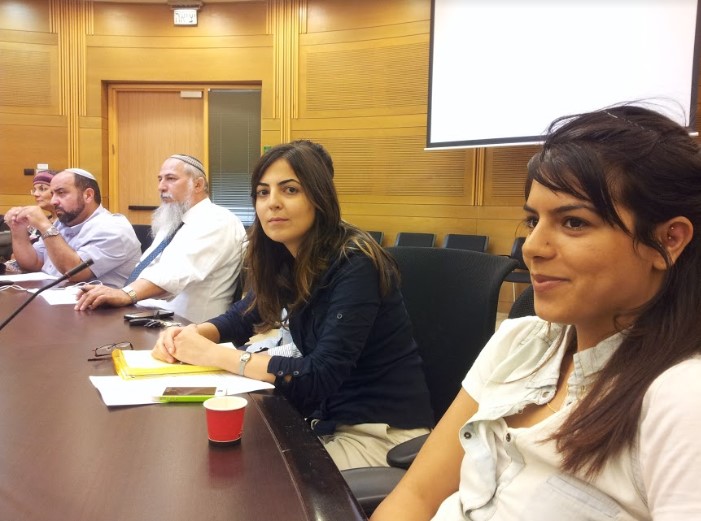 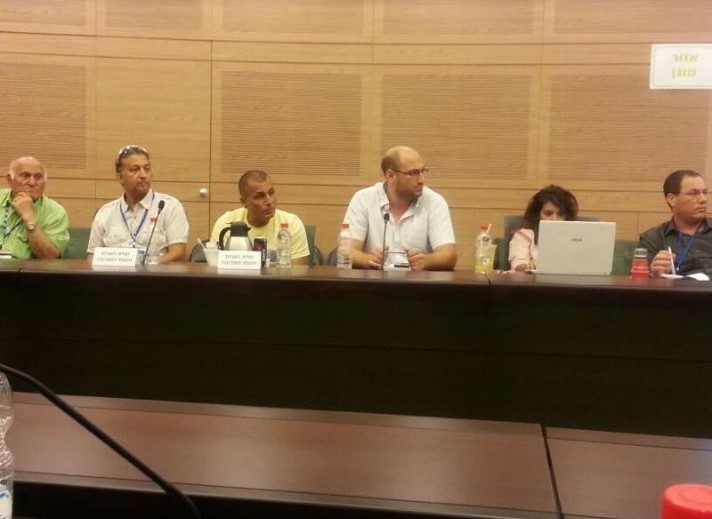 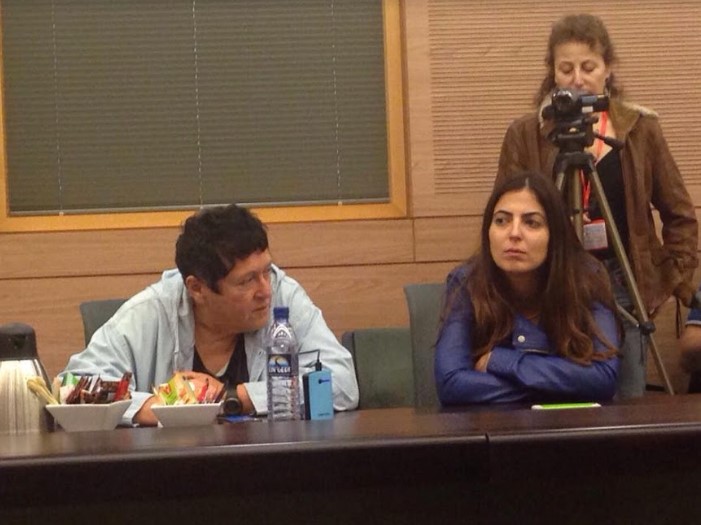 Discussion: current state and the solutions offered by the government to the problem of infiltration into Israel, 15 July 2013

The Knesset’s Internal Affairs Committee convened for a special discussion with the residents of south Tel Aviv to discuss solution to the problem of illegal migration into Israel. The Israeli Immigration Policy Center raised the issue of splitting apartments by property owners during the discussion, a custom enabling them to cram many illegal migrants in a small apartment. This phenomenon makes life difficult for the residents and increases the economic incentive to infiltrate Israel and stay in the country illegally.

As part of the discussion on clauses relating to the ban on illegal migrants taking money out of the country with Interior Affairs Minister Gideon Sa’ar attending, the IIPC raised the issue of the tax collected by the government of Eritrea from its residents staying in the country, through its embassy in Tel Aviv.

Discussion: State of Israel’s course of action regarding illegal migrants, following the ruling by the High Court of Justice. October 6 2014

Following the decision of the High Court of Justice to strike down the Anti-Infiltration Law for the second time, [Anti-Infiltration Law (Jurisdiction violations) (Amendment 4 and executive order), 2013] , the Internal Affairs Committee again convened with the interior minister in attendance, in order to present the means of coping with the phenomenon of illegal immigration into Israel. The IIPC raised the issue of criminality in the south of Tel Aviv, the need to increase police presence and the state’s duty to systematically deal with repeated delinquency among the illegal migrant population. In addition, the IIPC presented the manner in which halting the stream of illegal migration into Israel brought an end to the phenomenon of torture in the Sinai Peninsula.

At this meeting the IIPC first presented the need to promote the Deposit Law in order to encourage the illegal migrant population to leave Israel.

Discussion: Formulating a policy to handle the issue of illegal aliens in south Tel Aviv. 8 June 2016

Incoming chairman of the Internal Affairs Committee MK David Amsalem initiated a special discussion at the Knesset Internal Affairs Committee regarding the ways to cope with illegal migrants, with residents of South Tel Aviv participating. During the discussion the IIPC demanded that the state begin enforcing the Deposit Law and even begin the process with the government of Eritrea to return its citizens, with an emphasis on the population which is not facing any danger in their home countries.

Discussion: Formulating a policy to cope with the issue of illegal aliens in south Tel Aviv. 21 June 2017.

The Internal Affairs Committee convened another time in order to discuss the issue of illegal migrants, this time with interior minister Arye Deri chairing. A representative of the IIPC stressed to members of the committee the influence the Deposit Law has on migrants leaving the country, presented reports written by foreign countries regarding Eritrea, and raised the issue of the Eritrean government collecting taxes through its embassy in Tel Aviv.

From the protocols of the discussion:

“We know there is activity by regime supporters in Israel. There is not even one international report that says women cannot return to Eritrea. Even the report by the UN commission says that in many cases women are exempted from military service, like children. Then why are they here? Why are they getting all the benefits? It cannot be justified.

The Eritrean government encourages its citizens to get here, to work here, to enjoy overreaching group protection and to send the money home. This returns in all the reports. For those who want to read, the last verdict by the Swiss Federal Court determined this, as well as a report by the ICG, one of the most respectable think tanks in the world.

We should create incentives for these people to go to the embassy and really regulate their stay here. This is why the Deposit Law is a very important tool.”

The Knesset’s Internal Affairs Committee convened with MK Yoav Kisch leading the discussion, to discuss the implementation of the government’s policy on illegal aliens and the closure of the Holot facility. A center of the IIPC, Jonathan Jacubowicz, raised with participants the importance of the Holot facility for the immigration policy of Israel in the long run, mentioned the Eritrean government’s interest to have its citizens stay in Israel and insisted on the country’s right to have its own asylum policy:

“The State of Israel has become a place not worth coming for and not worth staying in due to instruments like Saharonim and Holot, the Deposit Law and the illegal aliens who have already left. When we established the holding facilities we stopped the influx even before the fence was erected. Not only is Holot an efficient tool to control immigration, it is also the most humane tool we advanced here because we put a complete stop to the phenomenon of torture in the Sinai. The State of Israel has erased this phenomenon from the planet because it stopped the influx of migrants. All this money transferred to the Beduins and was used to fund secondary immigration; all this was stopped by the State of Israel. Regarding migration – her, too, they say not everyone is a refugee but until today 20,000 illegal aliens have left. Not one, not two but 20,000.

Sudan is an enemy country and we have no ties with Sudan but if they pass through another country and do not settle down there, it means they can go to Sudan. I will add that today, according to international law, even most Darfurians can return to Sudan. Regarding Eritra – to all the humanitarians – the interest of the Eritrean government is that people will leave, make it to Western countries, receive a work permit and work there, because a third of Eritrea’s GNP comes from money they send back, and Israel is home to the largest Eritrean community in the world except the USA. It is a lot of money that the government of Eritrea receives, so to all the humanitarians opposing dictatorship, they are actually pumping up this dictatorship, they are working in symbiosis with the regime perhaps without intention, but de facto this is what is happening.

It is true that Europe is more generous about the granting of status, because their approach to this is that when there is a doubt, they take no risks and absorb everyone. It is Israel’s right to decide whether in doubtful cases it needs to accept or reject the migrants.”

During the discussions on criminality in the south of Tel Aviv, in which the commander of a south Tel Aviv police station admitted that since the closure of Saharonim and Holot there has been a rise in violence, robbery and aggravated assault in the area, Jonathan Jacubowicz, representative of the IIPC, again stressed the importance of the Deposit Law for coping with the phenomenon of migrants and raised the issue of violent struggles taking place in Israel between supporters of the Eritrean government and its opponents:

“There are thousands of active regime supporters and several thousand regime opponents. In the middle there is the majority, people who came here to work and understand that this is an economic mechanism serving the government of Eritrea, which is making a lot of money. I say that those who want to fight against their regime, should do so in Eritrea. There is where they need to fight, not here in the streets and not at the expense of the citizens of Israel.

Discussion: Examining the policy of non-deportation to Eritrea in light of international developments. 25 July 2018

Following the historic peace agreement between Eritrea and Ethiopia, the Knesset’s Internal Affairs Committee convened for a special session that discussed possible solutions to the issue of illegal migrants in Israel. The legal adviser of the National Security Council Gil Avniel said during the discussion that following the latest developments on the issue of Eritrea-Ethiopia peace talks there is hope for change and maybe Eritreans can return to their country while ensuring their personal safety. Head of the committee Yoav Kisch wanted to examine whether the State of Israel can implement a policy of deporting people to Eritrea.

“Israel is sitting on the fence. We were the country that absorbed the largest number of Eritreans in the world: in 2011 we absorbed three times as many Eritreans as the entire European Union. Instead of us issuing a report by the National Security Council, the Foreign Ministry or the Justice Ministry, we are sitting and waiting to see what other countries will say. If we sit and wait, then we may wait for two years, when there are some populations that can leave Israel as soon as now. In two years they will be more settled down and the residents of south Tel Aviv will suffer more. There is no reason for this stagnation and there is no legal justification for it either.”